The next graphic from Colonialism Skateboards is a Joe Buffalo pro board. Joe is from Maskwacis, Alberta (Samson Cree Nation) and has been skateboarding most of his life. As a Residential School Survivor, Joe uses skateboarding to overcome obstacles that many Indigenous peoples face on a daily basis. The skateboard graphic is explained below with a map of what each image signifies.

2. The collage of text are from several books written by Indigenous scholars and authors.

3. The child in the photo is a picture of Joe Buffalo and was taken for his photo I.D. at the Qu’Appelle Indian Residential School in Lebret, Saskatchewan, canada. The picture is to represent all the intergenerational trauma that Indigenous peoples continue to face everyday, and their resilience and perseverance to continue to push forward no matter what is in their path.

4. Indigenous Elders and old ones pass down vital knowledge to future generations. Their teachings and knowledge are gathered through storytelling and oral history. The image of the Elder in the ear is to represent the traditional knowledge that has been passed down for thousands of years. The traditional teachings of Indigenous Nations will continue to be carried down though listening to Elders and old ones in our communities.

4. Tecumseh was a warrior and Shawnee Chief who brought First Nations peoples from different tribes together to resist American invasion on Indigenous lands in the 19th century. Tecumseh allied with the British and with the help of these different tribes defeated the Americans.

5. This is an image of First Nation members from Grassy Narrows community demonstrating on Queen’s Park steps against the Mercury poising in their community waters in 1975. Indigenous communities throughout Turtle Island (North America and South America) continue to live without clean drinking water. It’s genocide. With a country that is supposed to be rich and prosperous, the brunt end of this country’s wealth is Indigenous poverty, oppression, and genocide.

6. The pictures are from Missing and Murdered Indigenous Women, Girls, Two-Spirit and Queer marches throughout canada. The hair has cultural significance and is a powerful symbol in Indigenous cultures. Although the teachings and knowledge may differ from nation to nation, long hair is a representation of identity, traditions, strength, wisdom, resilience, and perseverance.

7 & 8. The Zapatista movement was formed in 1910 and has been defending their land and people ever since. The Zapatista army declared war on the Mexican government in 1994. The army demanded basic human rights like food, housing, health, and education but they also wanted their independence, liberty, democracy, justice and peace for their people and others. These images give homage to the Zapatistas and to showcase how Indigenous peoples worldwide are resisting oppressive decisions from governments on their lands.

9. Joe Buffalo is a direct descendant of Pîhtokahanapiwiyin, known as Poundmaker, and will always be in Joe’s spirit and heart. Colonial history depicted Pîhtokahanapiwiyin as a troublemaker who had been charged with treason. In First Nations history, he is considered a great leader who stood up to protect his people and their inherent rights. Pîhtokahanapiwiyin’s treason charges were exonerated in 2019, which not only exposes the Canadian government’s wrongful convictions but also speaks volumes to his vision of peace.

10. The American Indian Movement (AIM) was a civil rights movement born in the 1970s. AIM was a powerful force that had a large group of followers, and the united states government did not like the message AIM was sending. AIM originated because Indigenous peoples living in the united states had been facing a lot of racial discrimination, high rates of incarceration, poor healthcare, malnutrition, and racist police brutality, and they had enough of this oppression. AIM organized themselves and patrolled the streets to help rid police brutality (sound familiar?).

11 & 14. Kanesatake – The Oka crisis started on July 11, 1990 in the town of Oka, Quebec, canada. The town of Oka and their councillors wanted to build a golf course on Mohawk land. The land was a sacred Mohawk burial spot where they had their ancestors buried. The town knew it was a sacred burial spot and didn’t care about the significance surrounding this part of land. Violence soon broke out and the canadian military was called in to help the rcmp. Over four thousand-armed canadian military were sent to Oka. Around the early 90’s, canada sent over 4000 canadian armed forces to help with the Gulf War. Canada and the descendants of settlers are still trying to claim land in canada. Colonialism is an ongoing human rights issue. Canada is a violator of human rights abuse and canada/abusers do not care.

12. christopher columbus didn’t discover America… he invaded it! There have been Indigenous Nations living on Turtle Island for thousands of years prior to being “discovered.” These Nations have distinct languages, cultural customs, traditions and territories. Treaties between Indigenous Nations have been in place well before European contact. The notion and celebration of columbus day is a celebration of a genocidal maniac, rapist and murderer.

13. The Battle of Batoche, led by Louis Riel and Gabriel Dumont, was one of the last resistances directed towards John. A MacDonald and the canadian government. Métis men and women were fighting for their land, rights to their land, their culture and their survival. The battle could have been avoided if the canadian government and canada’s first prime minister, John. A MacDonald, didn’t steal land from the Métis and honoured the Treaties that were signed in the 1870s.

14 & 15. The Battle of Cut Knife. Poundmaker and his warriors defeated the NWMP army in this battle. The Battle of Cut Knife could have been avoided if the canadian government and canada’s first prime minister honoured the Treaties that were signed in the 1870s. Famine, disease and starvation were immense throughout First Nations communities. The Prime Minister at the time knew about it and instructed Indian Agents/ government agents to with hold rations/food supplied and let these rations spoil so First Nations people would starve and die off. Poundmaker was fed up with seeing his people suffer and his people set off to the Battlefords to talk with Indian Agents about this injustice.

Even though the skateboard is a Joe Buffalo graphic, the face on the skateboard is to represent all Indigenous peoples of Turtle Island. The Indigenous person standing there could be anyone and represents every Indigenous person. No matter how much genocide and human rights violations are being forced upon Indigenous peoples, we will continue to push through, we will not stand down and will not stop. We will relearn our language, we will reclaim our culture and we will reclaim our lands. We will fight for what is right for everyone. Ahkii and the creator are watching. 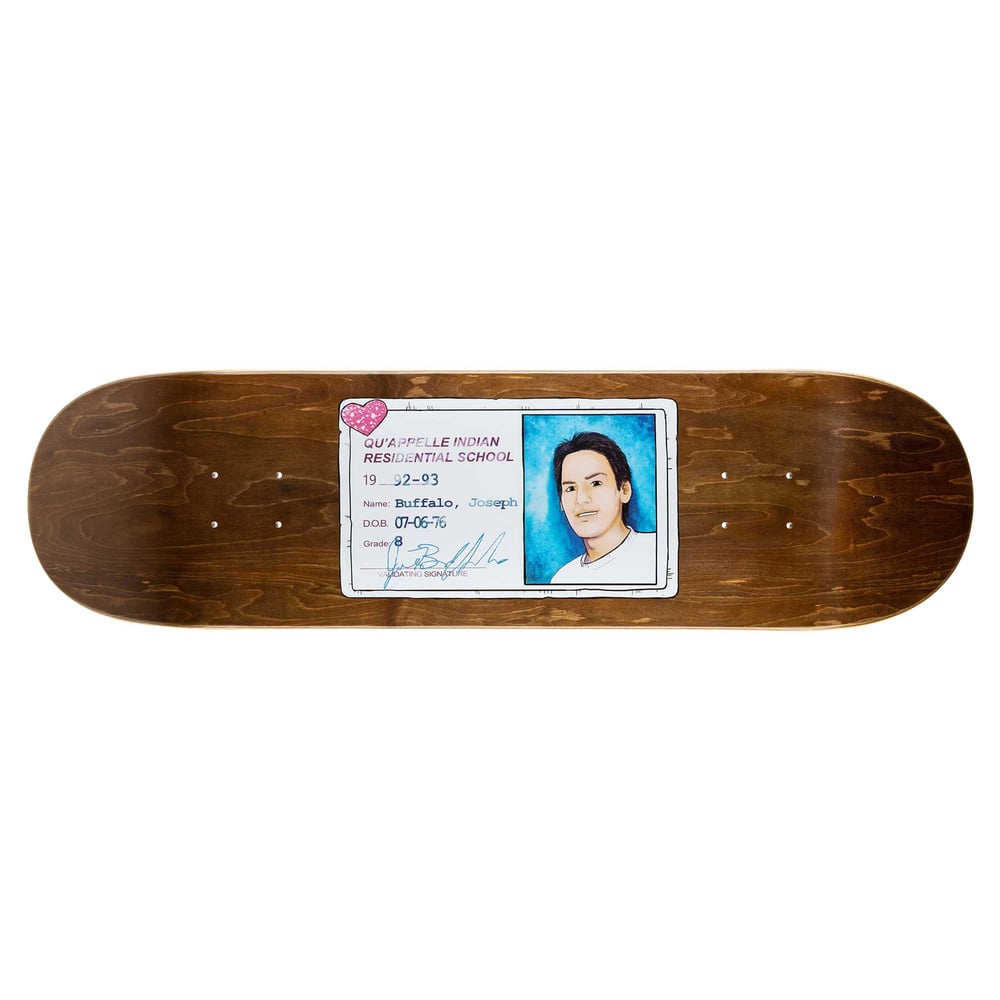 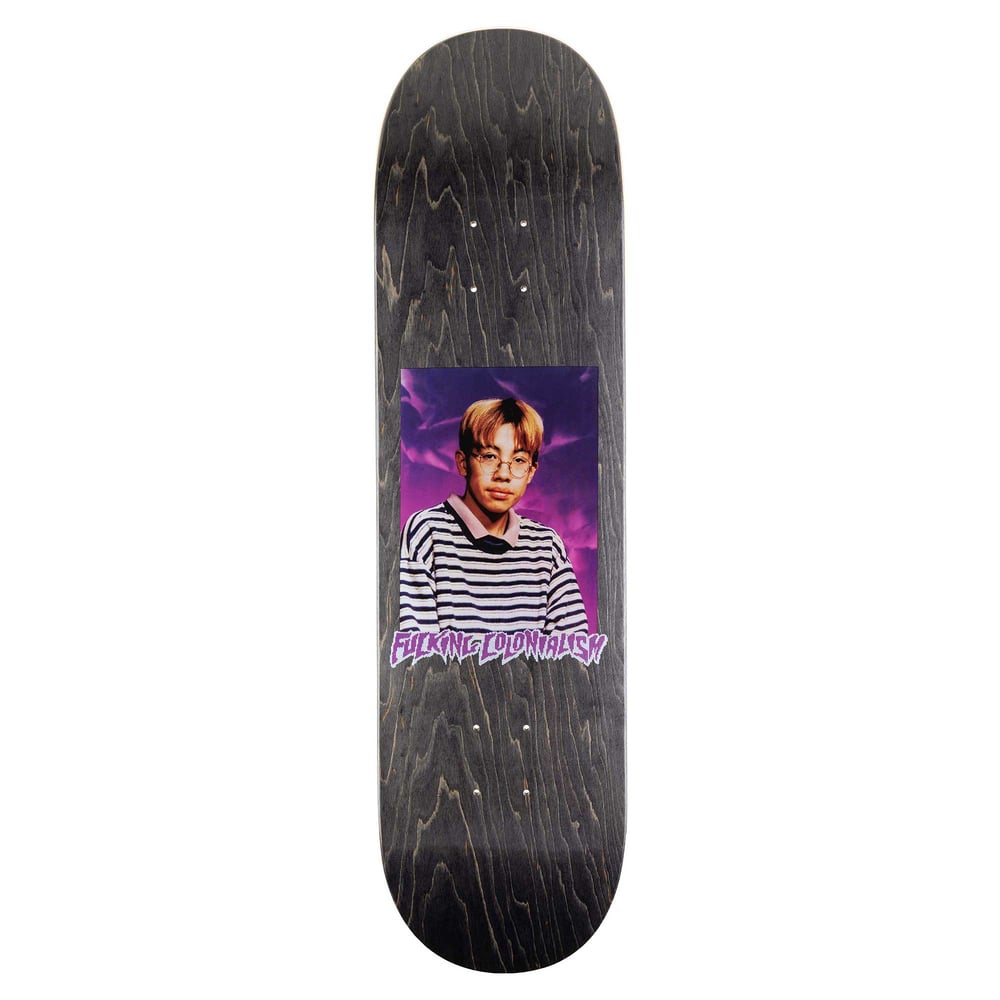